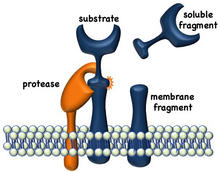 Ectodomain shedding is a proteolytic process occurring at the surface of cells that regulates the density of cell surface receptors and the release of soluble proinflammatory factors.

The A Disintegrin And Metalloproteinase-17 (ADAM17), originally referred to as TNF-alpha converting enzyme (TACE), is a key protease that mediates ectodomain shedding.  ADAM17 is constitutively expressed by leukocytes and its enzymatic activity is very rapidly induced upon their activation by various stimuli. 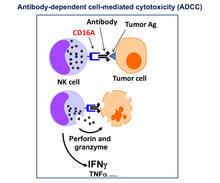 NK cells are innate lymphocytes that can be targeted to multiple tumor antigens with exquisite specificity by antibodies, resulting in antibody-dependent cell-mediated cytotoxicity (ADCC). CD16A on NK cells plays an exclusive role in the induction of ADCC, but it undergoes a rapid downregulation in expression upon NK cell activation by ADAM17. Our lab is focused on enhancing ADCC by NK cells, which has included the generation of a non-cleavable version of the IgG Fc receptor CD16A (hnCD16) currently licensed to Fate Therapeutics, and the generation of recombinant versions of CD64, the only high affinity IgG Fc receptor.

Neutrophils (polymorphonuclear cells or granulocytes) are the most abundant leukocyte in the circulation of humans and in the tissue during acute inflammation. Neutrophil recruitment from the blood into sites of inflammation and infection is mediated by various adhesion molecules, chemokines, and products from invading microorganisms. Neutrophils remove bacteria by phagocytosis, and will eventually undergo programmed cell death (apoptosis), and are removed from sites of inflammation by macrophages.

The monoclonal antibody CHO-131 (mouse IgM) recognizes a specific carbohydrate structure (core-2 O-glycan containing sLeX).  This carbohydrate is a high affinity ligand for the Selectin adhesion molecules (1).  CHO-131 reactivity provides a phenotypic marker for cells that bind to the Selectins (2, 3), which includes human neutrophils and a subset of T cells that migrate to sites of chronic inflammation in the skin, including psoriasis (4).  CHO-131 also detects certain carcinomas and its reactivity correlates with malignant progression and metastasis (5, 6).